RED BILLABONG, is Australia’s most ambitious creature feature since Greg McLean’s 2007 film, ROGUE. High concept and independently financed, the film is the brainchild of writer/director/executive producer Luke Sparke, that while paying reverence to local legend and maintaining an Australian identity, also succeeds in international appeal.

Touted as the biggest Australian action film of 2016, RED BILLABONG stars Dan Ewing (HOME & AWAY) and Tim Pocock (DANCE ACADEMY). In the Australian Outback, two brothers discover old secrets and family lies. As their friends start to go missing, they fear that they are being stalked by someone, or something, from their worst nightmares. But is it just a story? A legend? A hoax? Or is it real?

We were fortunate enough to catch up with Luke Sparke to discuss everything from the genesis of the concept through release strategy to forthcoming projects.

MONSTER: The poster art for RED BILLABONG declares ‘an ancient Australian legend has now been unleashed’, is the film loosely-based on Aboriginal mythology and how were you first inspired to write the screenplay?

LUKE SPARKE: Yes, it’s loosely based on Aboriginal mythology and white settlers’ legends from a few hundred years ago. I was looking to make a lower-budgeted Australian action/thriller film on something that hadn’t really been done before so I took a look back through our legends and myths, then re-opened this particular one and smacked my forehead thinking ‘Of course! why hasn’t anyone else done this in a big way yet?’.

I spent time time talking to various groups making sure I had the mythology right and also bounced a lot of ideas of Greg Fryer once he had been cast. He’s so kind and open to lots of ideas. Before we shot it, he traveled down to a group of elders and and others, and talked about what we were doing. Everyone seemed happy that we are bringing these stories forward in a new way, packaged into an action film that’s really fun – but so much history and weight behind it. 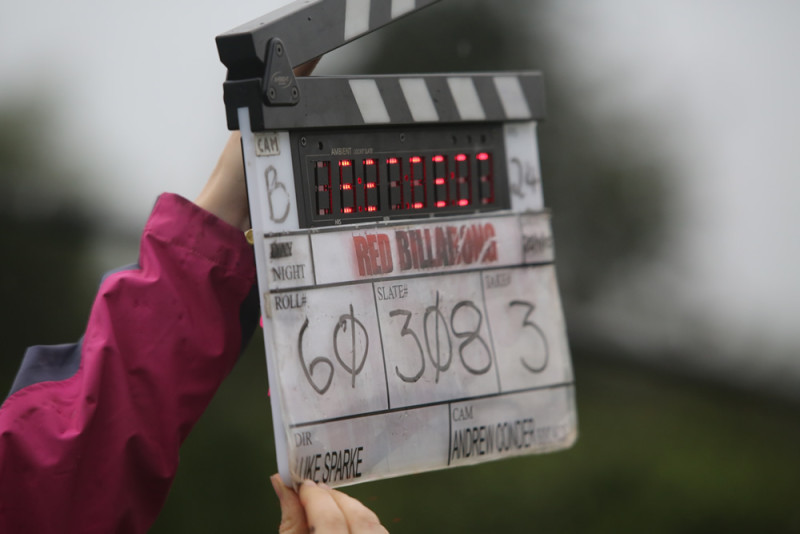 M: Privately financed and produced through your own production company, Sparke Films, how long did the project take to go from script to production?

LS: I started writing in 2007 just before I worked on the HBO series, The Pacific, and just kept re-writing for a few years. Around the end of 2012 i knew that if I waned to make this, I would have to do it myself, so set about structuring finance through our own company while continuing to hone the script with a few overseas editors.  Luckily I’ve worked in the Industry basically my whole life, so while this is my first feature as writer/director/Executive Producer, I would like to think most of our financiers could see I knew what I was talking about when pitching that I wanted to make this film.

The challenge was then, it’s all on us. From pre, shoot, post and release – it’ all on our shoulders to make or break it.

Unfortunately, genre films (or action films in general) just don’t get made in Australia very often. I know there are many reason behind that, but hopefully Australian audiences can get behind this fun action/creature film and it may start a discussion to make more.

M: For such a high concept film, is it true that RED BILLABONG only took six weeks to shoot and what were some of the key challenges you faced with such a tight turnaround?

LS: Five and a half weeks actually. It was the craziest, most ridiculous thing ever! But it was also really great because luckily I had a great crew and cast come together on a project that really made everyone think on their feet and outside the box. Being completely independently financed may have been 100% stressful in a lot of ways, but on the other side, I had 100% freedom when shooting. So I had the last big act story-boarded out as it relied a lot on the vfx – and we pushed that last to give art department time to build the sets – then started small with interior stuff.

I had my shot list then had many, many meetings with my terrific cinematographer, Andy, and we knew we would basically have to plan out everything before hand and shoot exactly what I needed for the edit to get it done in the time. I love editing, so the final shooting script is pretty much how we shot and edited it together – because there was no time to shoot alternatives! 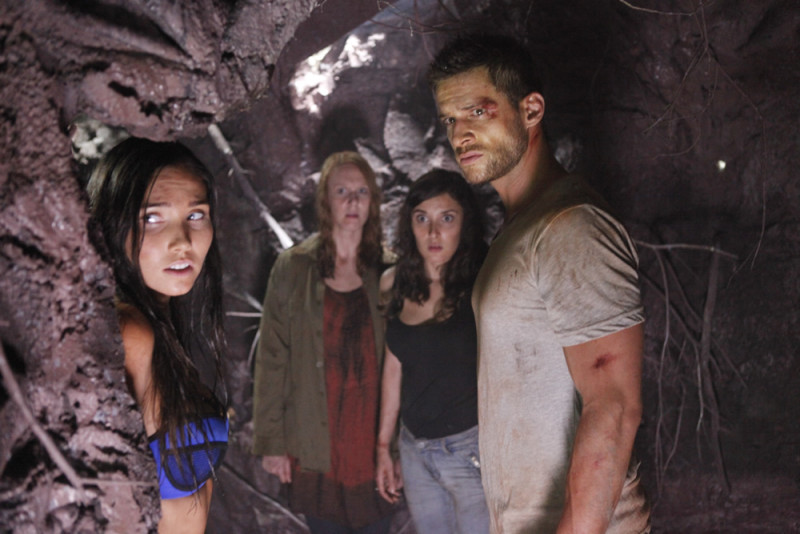 M: You had a strong hand in casting the film, can you take us through that process and what lead you in your final selection?

LS: Yes, being self funded meant we had to wear many caps, one of which for me was casting – which I didn’t mind at all. So we made a list of actors I had worked with in the past and others we thought would fit the bill, budget, timings and work ethic, then went out to the agents with this crazy little monster movie. That was a fun time.

Sophie Don (who plays one of the leads “Anya”) had just been cast in my two part doco ‘Yesterday is History” and I knew she would be good for the part. Ben Chisholm (who plays the man-child ‘BJ’) and I had been friends since ‘The pacific”, same with John Reynolds and James Straiton – three really talented actors that deserve a push. I met with Emily Joy on advice from her agent and basically hired her on the spot. Jessica Green’s agent heard about the film and set up a Skype chat after a self tape.

I always wanted Felix Williamson for his particular role since writing it and was blessed to have him come on board – what a character, extremely talented and a gentleman! The main two brothers was obviously my biggest area of back-and-forths as they serve as big emotional thread in this film. Dan Ewing was in my short list and the one to really be interested in the project – we’re the same age so grew up watching the same films, which really helped when it came to explaining the film or a shot or a sequence to him. So that seemed to click really well.

The last one cast was Tim Pocock and the first time we saw each other was the table read through, but I’m forever grateful it turned out the way it did as he took the character in a different direction and it turned out better than I dreamed.

I gave most of the cast a say in their characters, let them bring natural dialogue to scenes and always squeezed in one ad lib take or two – which turned out to be gold. You can have the best VFX in the world, but if people don’t care about the characters – there’s no point – and I really think each character has a moment or an arc that people will hopefully llke!

M: From the trailer, there appears to be a few homages to genre staples like THE TEXAS CHAINSAW MASSACRE and with RED BILLABONG clearly being an ode to the creature feature, are you a Horror fan yourself?

LS: Seems wired saying, but I never was much of a Horror fan growing up. I think that actually helped making this though, sometimes you like something so much, you end up using all the things you love – but by now day’s they are just cliche’s. My Producer, Carly, on the other hand is a huge Horror fan – so that balanced that out! 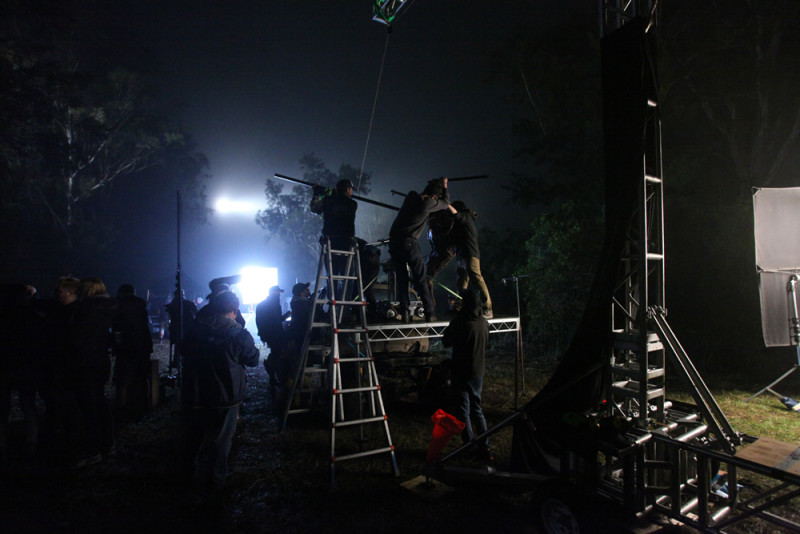 M: Coming across as a hybrid of horror, action and adventure, were their major filmic influences on RED BILLABONG?

LS: It’s more of a love letter to my favourite 80’s/90s movies like “Aliens” or “Jurassic Park”. Steven Spielberg is my idol, so I saw it as a ‘ more adult Amblin film” – what if the kids in “The Goonies” had an adventure in their 20’s? There would probably be more swearing and blood as it’s a little more mature.

Some people say it’s like an adult ‘Scooby Doo” mystery – I can see that!

M: After a series of event screenings, RED BILLABONG opens across Australia on August 25th, what are the plans for the film’s international release?

LS: International sales agent, Arclight Films have been handling that side of things. We showed an early version at cannes this year with great success. IIt’s already going to be screened theatrically throughout Asia and Japan before the years end. We have an upcoming screening in LA next month, then the rest of the world will follow.

M: What’s next for you, is THE 34TH BATTALION gaining momentum?

LS: Yes it is, very much so. I recently went to LA and had meeting with studios over there about our slate and what’s next – I’m really pushing the 34th as it deserves to be made.

Like anything in life, we’re really hoping this film will snowball our other projects – Ive got about 5 features and a big TV show I want to get done! So hopefully we will be very busy very soon.

Ahead of RED BILLABONG’s August 25th theatrical release, FILMINK are hosting a red carpet premiere in Adelaide & Melbourne, both with a cast and crew Q&A.